Rocks at the surface of the Earth are of many different ages, ranging from over 3 billion years old to less than 1 million years old.  Because under ordinary   circumstance matter can neither be created or destroyed, the new, younger rocks must have originated from older crustal material -  older rocks. Older rocks are destroyed by weathering processes and the remains are recycled into new rocks.  This cycle from old rocks to new rocks is called the rock cycle.

The interaction between the tectonic and the hydrologic systems causes constant recycling of the materials of the Earth's crust. Rocks are heated, metamorphosed, melted, weathered, sediment is transported, deposited and lithified, then it may be metamorphosed again in yet another cycle.  This recycling of the material of the Earth's crust has been going on for billions of years, as far back as there is a preserved geologic record (about 4 billion years).  The diagram above represents the different processes involved in the rock cycle.  Weathering and erosion at the earth's surface can break down rocks into small bits. These can be deposited as sediments that become sedimentary rocks. Burial, with rising pressure and temperature, can alter sedimentary (as well as any other) rocks to form metamorphic rocks. Continued rise in temperature can eventually melt rocks and produce magma. Cooling of magmas leads to igneous rocks, etc.

As we have seen in preceding lectures, atmosphere, biosphere and crust are interconnected in many ways, most importantly through the cycling of carbon.  Yet weathering of crustal rocks does not only supply and/or consume carbon, it also provides important nutrients without which the abundance of life would be severely compromised.  While we have seen how plate tectonics through sea floor spreading produces new crust, and  consumes old crust through subduction, not all the rock cycling goes back into the mantle.  Sedimentary rocks, for example, that get piled up at the margins of the continents are not returned to the mantle in significant quantities.  Instead, when subduction occurs along that continental margin, they get uplifted, folded up, and thrusted, and become part of a thickened portion of the continental crust that we commonly describe as mountain ranges or orogens.   There, portions of them are metamorphosed, and both the metamorphosed and the unmetamorphosed sediments are attacked by weathering, eroded, carried by rivers and glaciers to the sea, and dumped at the margins of the continents.  The next time subduction occurs the cycle repeats itself.  Whereas recycling of mantle material through subduction and sea floor spreading does not cause a whole lot of differentiation (what comes out is pretty much what goes back in), the recycling of crustal rocks across the continents has over the eons produced a continental crust that is compositionally very different from the oceanic crust.  We have looked at the plate tectonic portion of this cycle, and also at the associated igneous and metamorphic processes, in previous chapters.   What we will focus on in this chapter is the sedimentary part of the cycle, and how through separating the products of crustal weathering, it produces chemical differentiation.

Rivers and glaciers are the main vehicles by which sedimentary materials are removed from elevated portions of the continents (mountain ranges, plateaus), and are transported to the oceans and the continental margins.  Just as the large conveyor belt current in the oceans redistributes heat in the ocean-atmosphere system, so do rivers and glaciers redistribute sediments across the continents.  Glaciers are very powerful erosion and transport machines, but because they only play a major role during ice ages, on an historical perspective (over the entire Earth history) they do not play an as important role as rivers.

Fluvial systems are the most important dynamic system in shaping the surface of the continents. River systems drain the continents, and at the same time move weathering debris (gravel, sand, silt, mud) to the ocean basins. They are thus a main factor in the erosion (denudation) of the continents. By removing weathered materials they allow new material to be exposed to weathering, and thus aid the continued weathering of the earth's surface. They remove the rocks of rising mountain chains, promoting uplift of the root zone, and are thus involved in crustal dynamics (tectonics). All land surfaces are covered by a network of stream valleys.  Even in deserts, where rain being a very short-lived episodic event (once every few years), dissection of the landscape by stream valleys is a prominent feature. Thus, wherever we go, streams are the major factor that shapes our terrestrial landscapes.

Typically a river system can be subdivided into three subsystems: 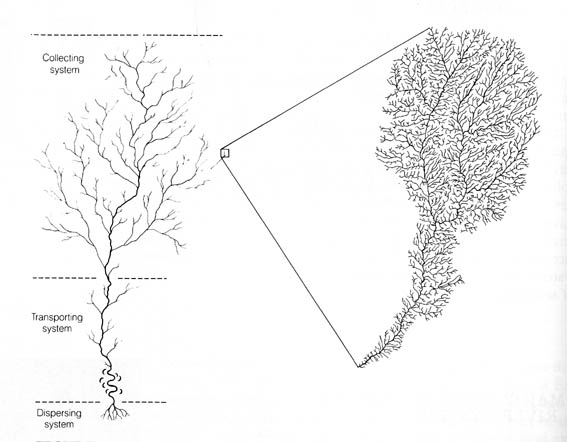 The Collection System consists of a network of small tributaries in the headwater region. There is a whole hierarchy of tributaries as the water and sediment is funneled towards the main stream. This hierarchy starts with erosional rills (inches wide, some yards long), followed by gullies (up to some feet wide), followed by creeks (up to some yards wide), streams (tens of yards wide), to major rivers (hundreds of yards to miles in width). Because as we go seawards in a drainage system the area drained increases in size, the larger members of this hierarchy will be increasingly common in the lower reaches of a river (they can carry more water), whereas the smaller ones will be dominant in the headwaters region. In most cases we can discern a dendritic (tree-like) arrangement of smaller and smaller tributaries as we go upstream. The drainage basins of rivers are separated by divides, and the same goes for the hierarchic lower members. They as well have smaller drainage areas, and are separated by divides from those of neighboring gullies, creeks, and streams. Thus we can examine many features of a river system on a small scale (say the scale of a creek), and can observe all the various features that are also characteristic of a whole large stream system. Bedrock geology will tend to influence the river pattern in a drainage basin, for example, if we have folded rocks, the river valleys will tend to be in rocks that are easily eroded (shales), and will be separated by ridges that consist of more resistant rocks (sandstones).

is constituted by the main stream and the major tributaries (Mississippi, Missouri), which are the main channelways through which water and sediment that is collected in the upper reaches of the drainage basin is transferred to the ocean basins. Of course, along the way these major rivers still gain additional sediment and water from tributaries further downstream. But the major contribution tends to come from the (usually) mountainous headwaters. They also will deposit some sediment in the river valley, because of decreasing slope and lesser transport power.

consists of a network of channels near the seashore that redistribute the sediment into the ocean. Fine grained material (clay, mud) will be swept with the water into the basin, whereas the coarser material will be deposited at the shoreline and form a delta.

SEDIMENT TRANSPORT BY STREAMS  Because of the role of rivers in erosion of the continents, they must also carry this material downstream and finally to the oceans, in order to remove it from the continents. Rivers transport erosion products in three ways:

The Suspended Load as mentioned above consists mainly of clay and silt, and is kept in suspension by the turbulence of the flowing water. It normally constitutes the largest part of a rivers load (remember, about 60% of all sediments consist of shale). Settling occurs when velocity goes to zero (enter lake or ocean).

of a river consists of the larger grains that are not kept in suspension by the turbulence of the flowing water. The Particles move by rolling over the channel bottom, or by making little jumps (saltation). The materials on the channel bottom stay in place until the velocity is large enough to move the particles (threshold velocity). Fluctuations in flow velocity may produce episodic sediment movement. Bed load usually does not constitute much more than 10% of a rivers total load.

signifies the dissolved salts in the river water. Most abundant are calcium and bicarbonate, followed by sodium, magnesium, chlorine, iron, and sulfate. Flow velocity has no influence (material can't settle). River water usually contains a few tenth of a percent of dissolved salts.

Streams remove the weathered material that accumulates on the earth's surface (the regolith/soil). The loose material is washed into gullies, the gullies merge to form creeks, from there it goes to streams and rivers. The flowing water transports the material and finally deposits it downstream (in addition dissolved load is carried). Thus the weathering blanket is removed continuously, and new bedrock is exposed to weathering.

MASS MOVEMENT AND SLOPE RETREAT  As a river cuts down with its channel the walls of the river valley become steeper and steeper, and finally gravitational forces will be so strong to make the material move downslope in order to reestablish a stable slope angle (angle of repose, piling up of sand and gravel, specific slope angle for different materials). In the case that the river valley cuts into solid bedrock the valley slopes may be very steep because of the internal coherence of the rock. If on the other hand our stream cuts into unconsolidated material, the valley slopes will adjust much more easily to reestablish a stable slope angle.

Eventually, all things merge into one, and a river runs through it.
The river was cut by the world's great flood and runs over rocks from the basement of time.
On some of the rocks are timeless raindrops.
Under the rocks are words, and some of the words are theirs.

I am haunted by waters.

From: A River Runs Through It, by Norman Maclean

ALLUVIAL FANS form preferentially along mountain ranges (called bajadas if coalescing) that were uplifted recently, or are still in the process of uplift, and form more commonly when there are significant variations in stream flow. As the sediment laden water comes from the mountain valley onto the slope of the fan, the slope decreases, and coarse sediment is deposited in the channels, the channels choke with sediment, and frequent channel shifting/abandonment occurs. Individual channels are small (small drainage area), and bed roughness in the channel is high because of abundant coarse particles. Thus we have small, rough channels, and lose a lot of energy in the channels due to friction. Therefore, even though the slope is comparatively steep (when compared with downstream sections of the river), the channels can be fairly straight and still expend all of their gravitational energy gain. Because of the choking of the channels with sediment during floods, and because of frequent channel shifting we end up with a braided stream. The picture above shows coalescing alluvial fans (bajada) in
Death Valley.  The channel patterns on these alluvial fans are
braided, the valley bottom is occupied by ephemeral lakes
(playa lakes) and salt pans.  Even though Death Valley is one
of the hottest and driest spots in the US, the landscape is still
dominated by fluvial features.

A delta is overall a complex depositional system with many subenvironments.   Follow this link to get an overview of the various environments and processes observed in the modern Mississippi delta.

WHAT IS A GLACIER ?

This picture illustrates how a glacial ice tongue that appears to "retreat", does not actually move back uphill.  The rock that is marked with an arrow is still steadily moving downhill.  The ice moves downhill all the time, but what is changing over time is this: the ratio of melting vs downhill iceflow is increasing.  As a net result, the icefront seems to "retreat". 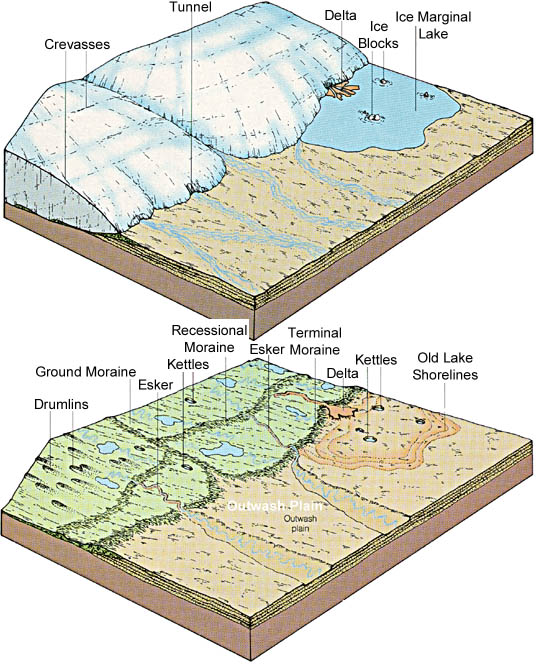 THE EFFECT OF TIDES